“We are pleased to announce the hiring of Lorraine Christianson,” said Dave Arndt, owner of D.K. Arndt, P.C.  “We are excited about the potential growth opportunity her addition creates for the residents of North Iowa.”

Lorraine is a 2017 graduate of Winona State University where her interest in small business success inspired her to seek a degree in accounting and finance.  After graduation, she moved back to her hometown of Wells Minnesota and lives on an acreage just outside of town.  In her free time, Lorraine enjoys fixing up her farmhouse, gardening, spending time with her dogs and studying for the CPA exam!

“I am very excited to be a part of D.K. Arndt, P.C. and I am looking forward to being a part of the Forest City community,” said Lorraine.

Beginning on Jan. 1, 2017, the standard mileage rates for the use of a car (also vans, pickups or panel trucks) will be:

These and other requirements are described in Rev. Proc. 2010-51. Notice 2016-79, posted today on IRS.gov, contains the standard mileage rates, the amount a taxpayer must use in calculating reductions to basis for depreciation taken under the business standard mileage rate, and the maximum standard automobile cost that a taxpayer may use in computing the allowance under a fixed and variable rate plan. 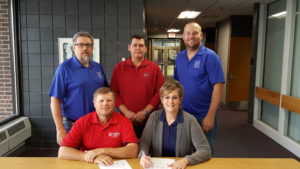 Betty Nash, CPA, has accepted the offer to join the leadership team as a partner in the D.K. Arndt CPA firm and manager of the Belmond office.

“Betty has proven herself to be a dedicated and conscientious member of our team. We are excited to increase her role with us,” commented Dave Arndt, CPA and managing shareholder.

Nash originally joined the firm in October, 2010. Now with over 22 years of accounting experience, she has worked closely with Dan Johnson, CPA, and the other CPA’s in the firm to not only learn the business but to learn their clients’ businesses.

Dan Johnson said, “She’s really been a good fit here. I’ve been cutting back my hours during the past few years and she’s stepped up hers. She works well with the clients, and I’m confident that she will continue to take care of them as I transition to retirement.” Dan also commented that his goal for retirement is to work 40 hours a week during tax season and take the rest of the year off.

“This is a great opportunity for me, “said Nash. “I’m thrilled to accept their offer and increased responsibilities. With Dan as my mentor the past six years, I’ve gotten to know the operations of our clients and their businesses. He’s been a valuable source for me and will continue to be available.”

Overtime Rules Have Been Delayed

A Texas federal court judge has issued a preliminary injunction, delaying the DOL’s changes to the FLSA overtime exemption rule. And while many may welcome the news, the reality is it creates a huge mess for employers.
Granted, you could argue the rule changes themselves created a mess for employers. But for the most part, employers have adapted to them by now in preparation for the December 1 compliance deadline.
Employers are now left wondering: Now what?
For months, employers have been preparing to deal with a higher salary threshold for exemption — along with communicating to employees who make less than $47,000 about how the rule changes would affect those workers.
Now, those same employers are stuck between a rock and a hard place as the rule changes have been delayed indefinitely. Do they revert back to their previous pay practices and act like all the prep work they’ve done up to this point was all for naught — only to possibly have to move forward with their compliance plans in a few months if the DOL successfully defends its position on the rule? That would require a lot of delicate conversations with employees.
Or do employers move forward with their compliance plans as if the injunction/delay was never issued? That could result in having to shell out a lot more overtime than the FLSA would require.
Those are questions employers will have to address on their own — no federal court ruling can help.

Be Aware of New Tax Filing Due Dates

Starting in 2017, there are several new dues dates for various tax filings.  Most of these changes were passed by Congress in 2015, but there is always a grace period to allow the IRS and taxpayers to get ready.  Here is a listing the major changes:

·         Form 1099s and W2s are now due by January 31.  Under old law, the forms were required to be sent to employees and payees by January 31 and could be electronically filed by March 31 with the IRS and Social Security Administration.  The new law has eliminated the March 31 option. These forms are now due by January 31 for all filings.  The penalty for not filing 1099s can be steep.   It can easily by $500 per form not filed and in some cases can exceed this amount.  Any aggregated payments for services exceeding $600 annually needs a 1099 if paid to an unincorporated entity.

·         Form 1120 (corporation returns) has been moved from March 15 to April 15.  This is tied to the acceleration of the due date for partnership returns.  One quirk is that any June 30 corporate year-end will still need to file by September 15 instead of October 15 for ten years (helps the scoring on the budget).

·         FinCen Form 114 (foreign accounts reporting) has been change to correspond with the individual due date of April 15 with an automatic extension until October 15.  Under the old law, it was due on June 30 with no extension available.  This is a very welcome change for my clients.

·         Form 1041 (trust and estate tax returns) can now be extended for five and half months up from the old five month period.

·         Form 990 (non-profit returns) can now automatically be extended for six months.  The old automatic period was three months with another filing for an additional three-month extension required.  This second step has now been eliminated saving time for preparers and the IRS.

·         Dependent’s Tax Identification Number (SS #) now must be issued by the return due date.  To claim a dependent and any associated credits requires a tax identification number (a social security number in most cases).  This number now must be obtained before the due date of the return.

·         Form 1098 (Mortgage Interest Statement) will now report (1) the beginning principal balance, (2) the mortgage origination date, and (3) the address of the property that secures the mortgage.  This is designed to allow the IRS to more fully determine the proper amount of mortgage interest deduction.  This will also make the preparer’s life easier since we can now match up 1098(s) with the underlying property.  Many financial institutions have already implemented these changes on their reporting (except for #2).

Many of these changes are welcomed by preparers.  Likely the most painful change for farmers is the new 1099 and W2 reporting requirements and the associated penalties with not filing the forms.  We will keep you posted with any other changes.

Is Your Business ERISA Compliant?

The following information is to advise you of a compliance issue you need to be aware of and possibly take action to ensure you avoid the risk of $110 per-day, per-employee penalties. There is an increase in the number of Department of Labor (DOL) rules regulating health and welfare plans, which is putting employers at an increased risk of significant penalties with DOL audits said to be on the rise.

Under ERISA, the failure to have or provide a Summary Plan Description (SPD) or Plan Document puts your business at risk of an audit by the DOL. However, with the correct documentation you can make sure you have the federally required documentation in place. I would encourage you take some time to review your benefit plan documents with our business associate Dustin Petty from BASE within the next month to ensure you are in compliance.

Dustin will take the time to assess your compliance risk and make sure you are fulfilling the ERISA requirements. If you find that you are failing to meet all of the requirements of an SPD and Plan Document, then you will want to move forward with an ERISA Wrap provided by BASE. The ERISA Wrap protects you from potential fines you may receive from the DOL concerning SPDs and Plan Documents in the event of an audit.

Many employers believe that certificates of insurance, insurance contracts and benefit summaries are enough to fulfill the requirement for SPDs and Plan Documents. However, they do not contain all of the required information. In order to stay clear of compliance issues, employers must have an ERISA Wrap in place. An ERISA Wrap is designed to wrap around insurance certificates and benefit plan booklets, along with other required documents, to meet the provisions that protect the plan and employer.

With the SPD and Plan Document requirement, an increase in DOL auditors, and the recent DOL overtime ruling set to go into effect December 1, 2016, means an increased chance of audit. In the past decade, 72% of DOL audits have resulted in penalties, so we urge you to call Dustin Petty at 1-888-386-9680 to assess your compliance risk.

The Internal Revenue Service issued a consumer alert providing taxpayers with additional tips to protect themselves from telephone scam artists calling and pretending to be with the IRS.

These callers may demand money or may say you have a refund due and try to trick you into sharing private information. These con artists can sound convincing when they call. They may know a lot about you, and they usually alter the caller ID to make it look like the IRS is calling. They use fake names and bogus IRS identification badge numbers. If you don’t answer, they often leave an “urgent” callback request.

“These telephone scams are being seen in every part of the country, and we urge people not to be deceived by these threatening phone calls,” IRS Commissioner John Koskinen said. “We have formal processes in place for people with tax issues. The IRS respects taxpayer rights, and these angry, shake-down calls are not how we do business.”

The IRS reminds people that they can know pretty easily when a supposed IRS caller is a fake. Here are five things the scammers often do but the IRS will not do. Any one of these five things is a tell-tale sign of a scam. The IRS will never:

If you get a phone call from someone claiming to be from the IRS and asking for money, here’s what you should do:

Remember, too, the IRS does not use unsolicited email, text messages or any social media to discuss your personal tax issue. For more information on reporting tax scams, go to www.irs.gov and type “scam” in the search box.

On May 18, 2016, President Obama announced the Department of Labor’s final rule updating the overtime regulations, which will automatically extend overtime protections to over 4 million workers considered “white collar.” This new rule will become effective December 1, 2016.

The overtime rule changes employees classified as “white collar” to require wages of $913 per week, or $47,476 annually. The new rule does contain various exemptions to this rule that may allow certain employees for a reduced salary if all requirements are met by their job requirements. The requirements are for executive, administrative, learned professional, computer, and outside sales positions. We recommend you contact us to discuss if you believe there is an employee that meets these requirements.

To help in making changes to your employees pay status, we request you contact us to update the employee records to become compliant for this new rule.